prolific television artist who painted tens of thousands of landscapes specifically for his TV shows. The historical artist who died in 1995 stands as a cultural staple with his outstanding saying of – Happy Little Trees. Some episodes of his shows which are trending on YouTube include “The Joy of Painting,” with over 450 million views.

Though he’s dead, most of his paintings have made tremendous impacts globally that many people demand to buy them. But the issue is how much is a Bob Ross painting cost? One thing about Bob Rosss works is that they are very scarce. However, when they come up for sales, a Bob Ross painting cost more than $10,000 with several dozens of bids for them.

How Much Is A Bob Ross Painting Cost?

Some sales of original Bob Ross paintings recently cost between $8,000 $10,000 per painting. There was still an eBay Listing of one of Bob Ross’s paintings, ‘Triptych Mountain Landscape,’ at the cost of $55,000.

During Bob Ross TV shows, he always taught people steps to create a definite painting outline. This makes it’s quite difficult to get original Bob Ross paintings online as many individuals are using his steps to make similar paintings. Though most of them are quite beautiful, some are painted with cheap paint.

So, you can get Bob Ross painting online that may be less expensive, which Bob didn’t make personally.

Which Is The Most Expensive Bob Ross Painting?

With the few of his paintings that went through auctions, buyers will always bid according to their discretion and desperation for the acquisition of the piece of art. Bob Ross Inc. doesn’t sell the stored original Bob Ross paintings. It might be quite difficult to ascertain the price of the most expensive Ross painting.

How Do I Know If I Have A Real Bob Ross Painting?

You can verify your painting if you feel its a real Bob Ross painting. Simply send an email to [email protected]m to authenticate if Bob Ross did the painting personally. Annette Kowalski, the co-founder of Bob Ross Inc. and the mother of the current president of the company, confirms the use of certain measures for the authentication process. She mentioned the brushwork as well as Bob Ross’s hand movement and quality of signature.

There are no recent sales for the real Bob Ross paintings. Over 1,000 originals of his paintings are packed in cardboard boxes within his company, the Bob Ross Inc. in Herndon, Virginia. If you recently have a Bob Ross painting, it’s probably a similar painting from that someone else made while following Bob Ross’s instructional steps. 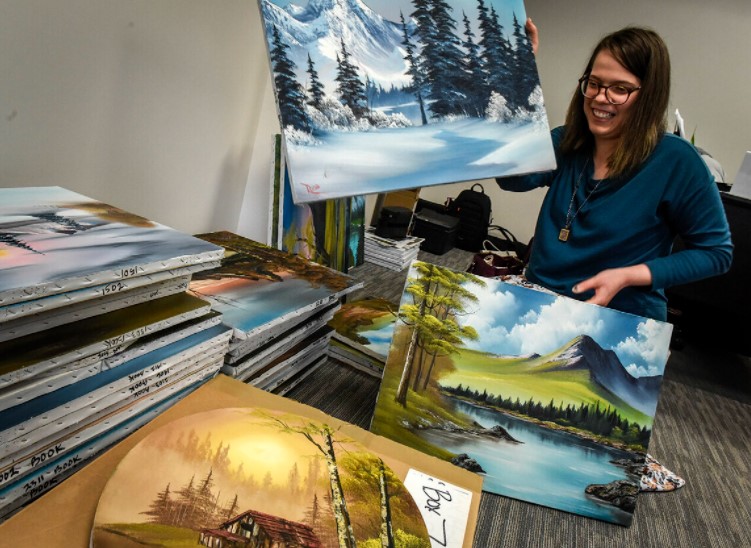 Alternatively, one of the possible ways to get a Bob Ross painting style is to personally do it yourself. Through his instructional guide and steps online, you can produce a similar painting of Bob Ross of your choice.

There are some Bob Ross painting kits available for sale in different online and offline stores. Purchase any one of your choices, such as the Master Set, and proceed with the painting. Within a few hours of your time and through Bob Ross’s soothing tutorial voice, you’ll come out with an amazing painting that you can be sure is a replicate of his original creation.

Where Are The Thousands Of Bob Painting?

An investigation of the thousands of Bob Ross paintings revealed that many of the paintings are stored in cardboard boxes in the Bob Ross Inc. Besides his paintings that Bob Ross donated out to PBS stations for their personal auctions, the paintings of this historic TV artist are locked away in his Virginia’s company.

For every of his painting on his television show The Joy of Painting , Bob Ross made three copies. He made the first copy before the show, and this usually serves as his reference. The second copy is the one that he paints during the period of the program. Sometimes, Bob Ross will make some addition in his second that will enhance his output and intrigue his audience the more. Finally, the third copy is the one he makes for his instructional teachings and coaching.

How Bob Ross Handled His Paintings

Bob Ross had a total of 403 episodes from his entire television show The Joy of Painting. He painted in about 381 of the episodes, while the rest of the episodes had guest artists. Since he has three copies for each painting, that brings the original paintings to about 1,143 with respect to his shows. However, his company, Bob Ross Inc., has an estimate of about 1,165 paintings in boxes within the company.

Besides his paintings on his TV show, Bob Ross made other paintings in public events, as an instructor, and even for charity. Though none one could give the exact number of his paintings, the total will run into tens of thousands.

According to Bob Ross, while reacting to some public questions about what he does with his television paintings, he donations lots of them to PBS stations within his country. Bob explained that the stations usually auction the paintings to make some money from them. So, he encouraged those interested in acquiring a copy of his paintings to contact their PBS station for that.

How Did Bob Ross Start His Painting And His Progress

Bob Ross, born in 1942 in Daytona, Florida, became a school drop-out in his 9th grade to join his father in his carpentry shop. He was later recruited in the Air Force at 18 and served as a drill sergeant for 20 years in Alaska.

He had a turn in his life upon the discovery of art through inspiration from Bill Alexander, a TV painter then. This led him to start painting landscapes, usually on pans of gold mining for sales in Alaska’s local markets.

Bob later moved back to Florida, where Alexander trained him to be a painting instructor with a certificate. Through the encouragement of one of his students, Annette Kowalski, Bob established the company “Bob Ross Inc.’s” using his and Annette’s life savings. This led to the TV show The Joy of Painting, with the support of a PBS executive.

Thus, within the period of its airing from 1983 to 1994, the TV show gained popularity. The broadcast was on more than 300 stations having over 80 million viewers daily. Through each of his shows that last for about 27 minutes, Bob Ross instructs his views on how to paint some beautiful landscapes. He used his soft, calming voice while adding some entertaining lines of speech to captivate his viewers. Also, there were some occasional appearances of Peapod, his pet squirrel.

Though Bob Ross never got paid through his television shows, he utilized his partly owned company to make some cash. He initiated the sales of paintings and art supplies, instructional videos, merchandise, and workshops. As a result, Bob Ross Inc. could realize about $15 million yearly profit or more.

Through his investigation, while trying to buy a real Bob Ross painting, Aaron Byrd, NY Times reporter, made a detailed trail to his discovery. However, Byrd was disturbed that there’s no original that he could find out of the thousands of Bob’s paintings. This discovery led him on a journey to Bob Ross Inc in Virginia, where he found lots of Ross’s paintings packed in archives.

By interacting with the company president, Joan Kowalski, she revealed that Bob Ross paintings are stored within the company’s archives. Unfortunately, the storage for such highly-sought paintings is not under climate-controlled conditions and has no special protective measures for its security. Instead, the company just kept them in cardboard boxes.

Further in the speech, Joan Kowalski stated that Bob Ross Inc has no intention of selling Bob’s paintings. She mentioned that the late legendary artist didn’t paint those images to sell them. Instead, his creations are means of displaying his unique painting talents and techniques. Also, he used them as a marketing strategy for pushing his painting supplies to the public.

Does Anyone Own A Bob Ross Painting?

It’s very rare to get an individual that owns a real Bob Ross painting. This’s because Bob Ross Inc., the artist partly owned, locked up most of Bob’s original paintings within its archive.

However, the company donated some of Ross’s works to the Smithsonian, a National Museum of American History. All the paintings and other materials later became permanent collections and artifacts for the museum.

Since the company doesn’t sell Bob Ross paintings, most of Ross’s paintings out in public are fake. This’s because lots of artists took up painting of Bob’s works using his instructional guide online. So, they could produce paintings similar to the original of Bob’s works.

How Long Does It Take To Do A Bob Ross Painting?

Bob Ross completes most of his painting with a period of 30 minutes or at least. Most individuals who follow Bob Ross’s instructional guide can take up to 90 minutes to finish a painting. For the more competent one, they can finish within 60 minutes.

While creating Bob Ross paintings, different people use different time frames to complete their works. There’s no need to compete with the master Bob Ross himself finishes his creation in less than 30 minutes. You need to take your time to bring the best that you can as you follow Ross’s instructional soothing voice.

However, some factors can determine how long it can take to complete a Bob Ross painting. The significant considerations depend on the technicality in the painting and the painting prowess of the individual. For example, in a simple painting of some landscapes, some people can complete the task within 45 to 60 minutes. But when it involves a more complex painting, an average painting period of about 90 to 120 minutes is possible.

The process may not be so easy and simple for an average painter. There will be time for the color mixture and creating unique features like the trees, leaves, and others. Also, consider the time to use for cleaning the brushes. Despite how long it may take for you to complete a Bob Ross painting, you should focus more on the painting process and not necessarily the outcome and its creation period. Focusing on the process helps you to relax and enjoy the fun in painting as a creative art.

Bob Ross paintings are legendary historic and famous paintings that the prominent TV show artist Bob Ross created. Getting the originals of these paintings is very scarce and difficult. However, on a few occasions of their appearance, most people always wonder how much is a Bob Ross painting cost.

Read More:How Much Does It Cost to Paint Rims?

Randy Charles is the owner of PaintCentric.com, a website dedicated to providing information, tips, tricks, and news about all things paint. With over 10 years of experience in the painting industry, Randy has become an expert in the field and is passionate about helping others learn more about painting. He has written numerous articles on the subject and is committed to providing accurate and up-to-date information to his readers.

As I said, I had the experience of painting a small object to a large commercial building. Here in Paintcentric, I’ll share everything gradually so that whatever you want to paint, you can do that with perfection. You’ll find here all kinds of painting DIY tips, guidelines, different types of painting tools, etc., to change the outlook of your property.

This site is a participant in the Amazon Services LLC Associates Program, an affiliate advertising program designed to provide a means for sites to earn advertising fees by advertising and linking to Amazon.com. We are compensated for referring traffic and business to Amazon and other companies linked to on this site.